A Virtual Trip to the Desert During Lockdown

It’s desert season, and being in quarantine means we need to get a little more creative about how we get our desert fix. Trail-running writer Morgan Sjogren can help. 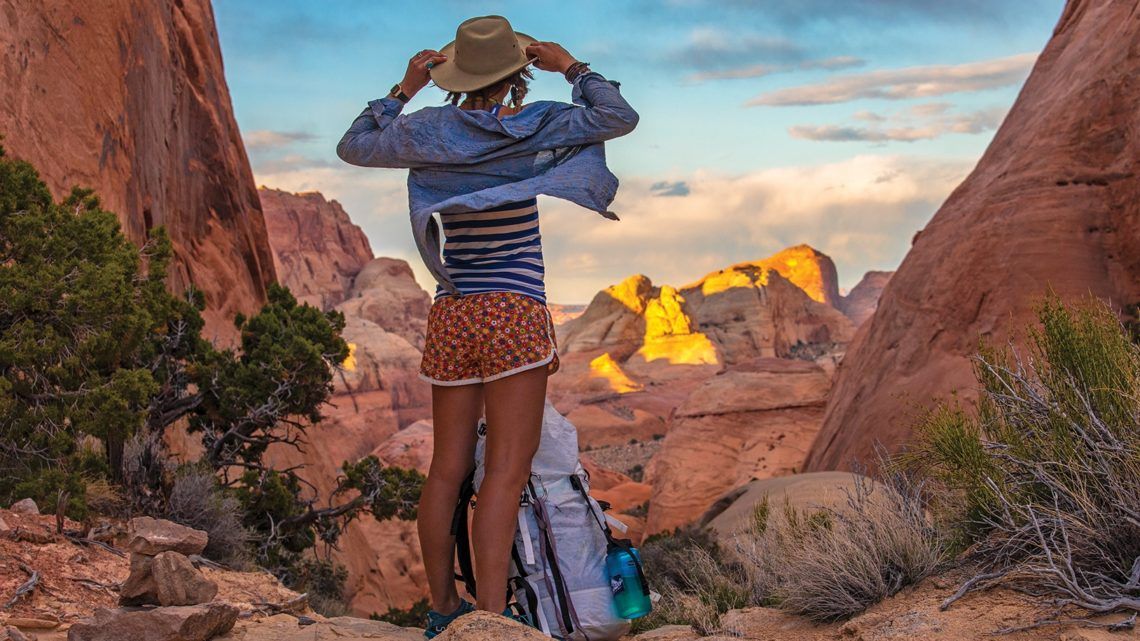 Max is a writer and 2019 ROAM Awards Essay Winner. Down to Bedrock is a new column from Max that explores innovation in outdoor adventure.

On a typical April day in Indian Creek, Utah, wildflowers bloom in the meadows and the umber cliffs stand in contrast against the deep blue of a cloudless sky. At Supercrack Buttress, one of Indian Creek’s most popular crags, climbers line the cliffs, jamming perfect cracks in the sandstone and exulting in the springtime sunshine. It’s desert season. Springtime in the Creek, or any other spot in the desert, is idyllic.

I can’t say from firsthand experience, but I imagine, and hope, that the Supercrack Buttress parking lot—which is typically crowded with Sprinter vans and Subarus from all over—is a little quieter this April. When calls to self-quarantine came up in mid-March, I admit that climbing and camping in the desert sounded like a pretty nice way to isolate myself. Of course, that turned out to be a pretty selfish thought, as Moab locals pointed out that an influx of travelers could seriously threaten the rural population. So, like so many others, I stayed home.

Canceling your spring climbing, backpacking or biking trip may feel like a major letdown, but in the face of an international crisis, it means little. (And we must remember, having the means to travel for recreation is the ultimate privilege, one that many, many people do not have). Luckily for us, the desert’s not going anywhere. And just because we can’t be there physically doesn’t mean we can’t take a little virtual trip.

In that spirit, this week’s column is a virtual tour of the desert, starting with a spotlight on Morgan Sjogren, a writer, trail runner, and one of the strongest new voices of the desert. After that, Morgan and I share some of our favorite desert media—It’s (almost) as good as the real thing.

Morgan Sjogren: A new voice for the desert

It was the summer of 2017, and Morgan Sjogren had just gone through a divorce. In her evaluation of what really mattered to her, she settled on two things: running, and writing. Leaving behind a job in PR, Morgan hit the road. She lived in her car, sleeping on a dog bed in the back—her former husband kept the dogs—while carving out a new living as a writer, and running as much as possible. Her thoughts on the matter: ”Once you have nothing to lose, it’s the perfect time to try.” 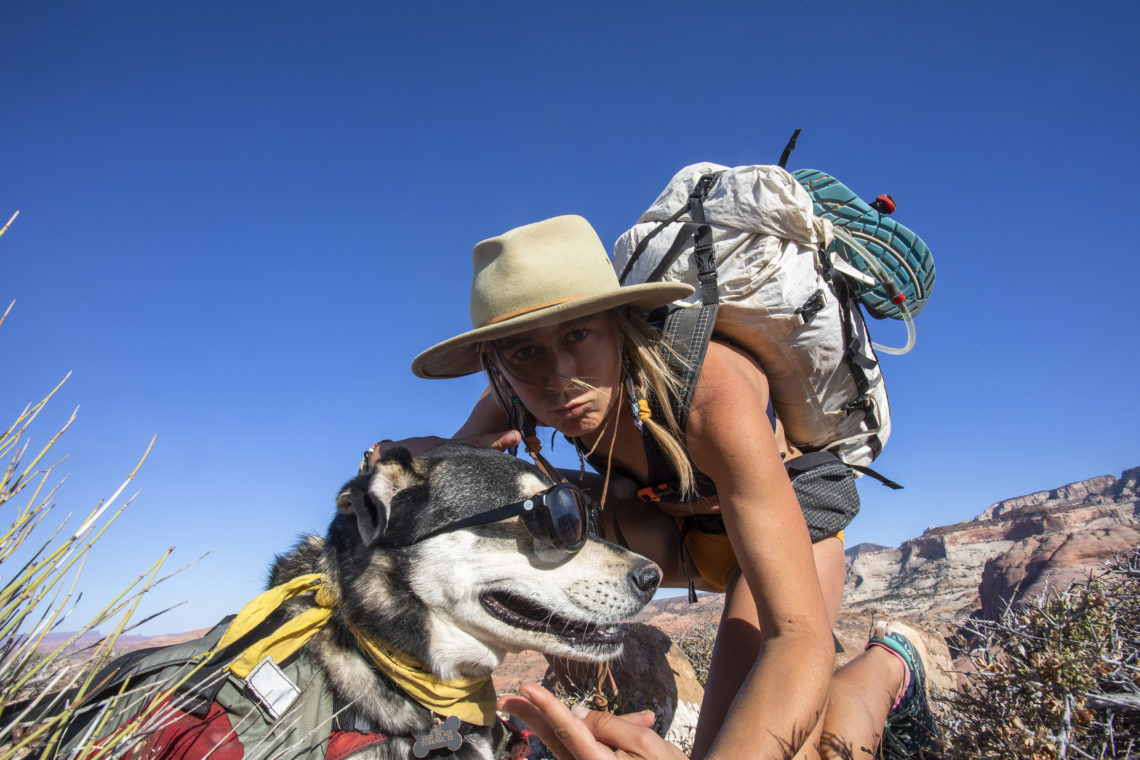 Money was tight—really tight. At one point she lived exclusively on a supply of beef jerky, nut butter and beer that someone had given her. Morgan recalls another time, when someone, probably seeing the dog bed in the back of the car, left a bag of dog treats on the windshield while she was out. Her style can be summed up pretty well by her response: “Well, now I’ve got free snacks!”

Morgan joined a new generation of dirtbag trail runners who slept at the trailhead and ran something new every day. Much of her early writing, which she shared in places like Trail Runner Magazine and REI Co-Op Journal, featured her musings about the places where she ran. Often, that was the canyon country of the desert Southwest, where a naked expanse of sandstone—carved into buttes, hoodoos, caves and cliffs over millennia—provided an endless supply of mystery and inspiration. 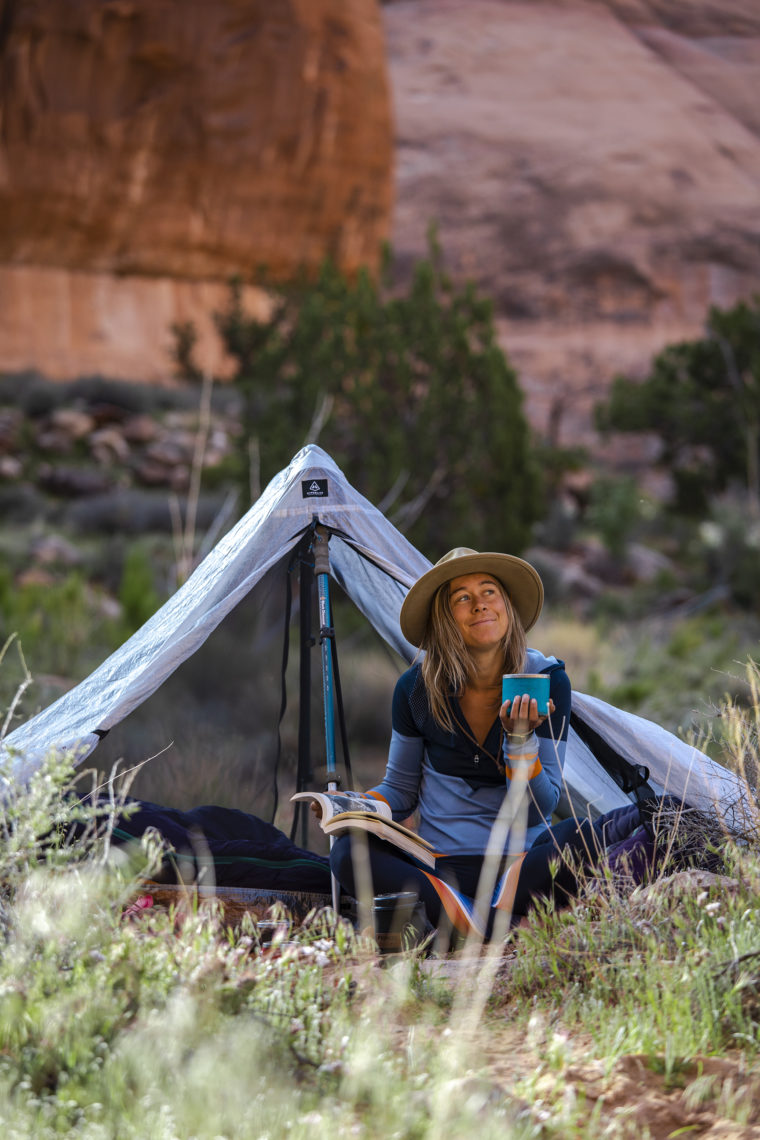 Photo of Morgan by Stephen Enginoire

Morgan uses her writing (and her running, for that matter) to explore. If there’s a thread that ties her work together, it’s her unequivocal love for wild places, and her mission as a writer, as she sees it, is to convey some of the magic of those places.

With its enormous cultural resources, unparalleled beauty, wealth of recreation opportunities and abundance of natural resources—paired with the fact that a huge proportion of the land is federally managed—the Southwest is the crucible of public lands issues in America. Much of Morgan’s work involves the people and places at the center of the conflict.

Case in point is Bears Ears National Monument in Southeastern Utah, where years of effort on the part of five Native American tribes to protect sacred land resulted in a 2016 presidential proclamation that gave protected status to 1.35 million acres of public land. Morgan was approached to write a hiking guidebook to the newly declared monument. Worried about having a part in driving up visitorship to the area—which comes with its own set of threats to the land, particularly if the area’s infrastructure isn’t robust enough to accommodate them—she initially wanted no part in it. She laughed, “People hate guidebooks, and they hate the people that write them!”

On the other hand, she said, “It’s really hard to understand why these places need to be protected if you haven’t witnessed them firsthand…. It’s a double-edged sword. And it’s something that we’re going to have to grapple with a lot in our lifetime.”

After consulting with an archeologist friend familiar with the many significant cultural sites in the area, she began to see things a little differently. In the wake of the monument designation, tourism would increase anyway, with or without a guidebook. And by writing the book herself, she saw the potential to influence how people visited the area. 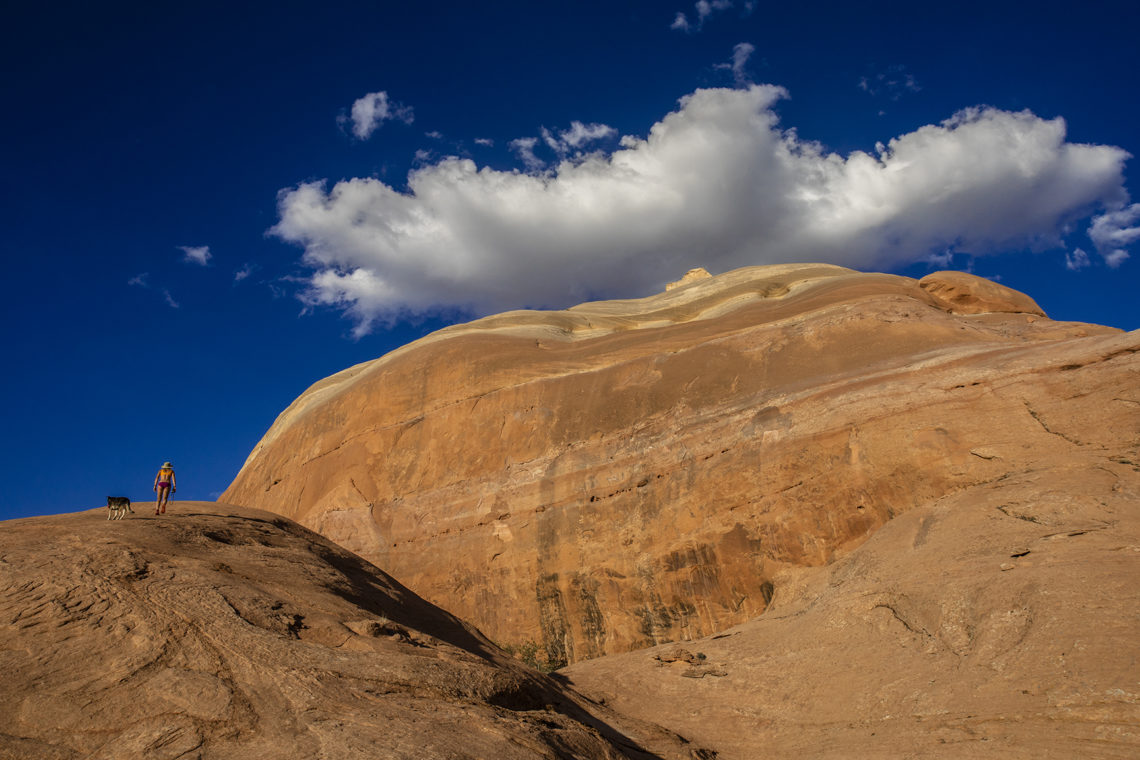 “What’s missing,” she said, “is that we have an increase of tourism, but with a lack of education and informational materials that are conservation-focused.” So she made it her mission to instill in her guidebook readers a serious sense of stewardship. Her goal isn’t to drive people to the desert, she said, but to provide those who do visit with a conservation-oriented perspective.

In some of her latest work, written for a Southwest-focused outdoor culture magazine called The Gulch, Morgan brings that educational component and adds to it a blend of history and emotion-driven narrative. She describes how, in her wandering and running to far-flung corners of the desert, she repeatedly came across the same name engraved in the rock. Her curiosity pushes her on a quest to track down the man behind the mysterious engravings. She classifies the writing as “historical adventure,” and is currently working on a book in the same vein.

Morgan maintained the nomadic lifestyle she began several years ago while she wrote two more books. One is another guidebook, The Best Grand Staircase-Escalante National Monument Hikes; the other, Outlandish, is an amalgamation of personal essays, wanderlust-inducing photos, and recipes that Morgan has perfected in her years on the road. (She calls it an answer to the question of “How does Morgan’s brain work?”)

Almost three years since she started writing full-time, Morgan still effectively lives on the move. That suits her just fine. Living as a traveling writer has expanded her world and forced her to find community in non-traditional ways, whether that’s writing to archeologist pen-pals or grabbing coffee with an elderly native friend whenever she passes through the reservation.

Most importantly, though, living in the open air with easy access to the terrain that moves her provides a sense of clarity that she doesn’t get when she’s in more urban, populated settings. “If it were up to me,” she said, “I would never return to the city.” But writing—and sharing the stories of the places she loves with others—is the one thing that brings her back.

Morgan Sjogren is the author of three books and has been published in Adventure Journal, Runner’s World, Backpacker Magazine, and many others. A self-described running bum, you can find her on Instagram 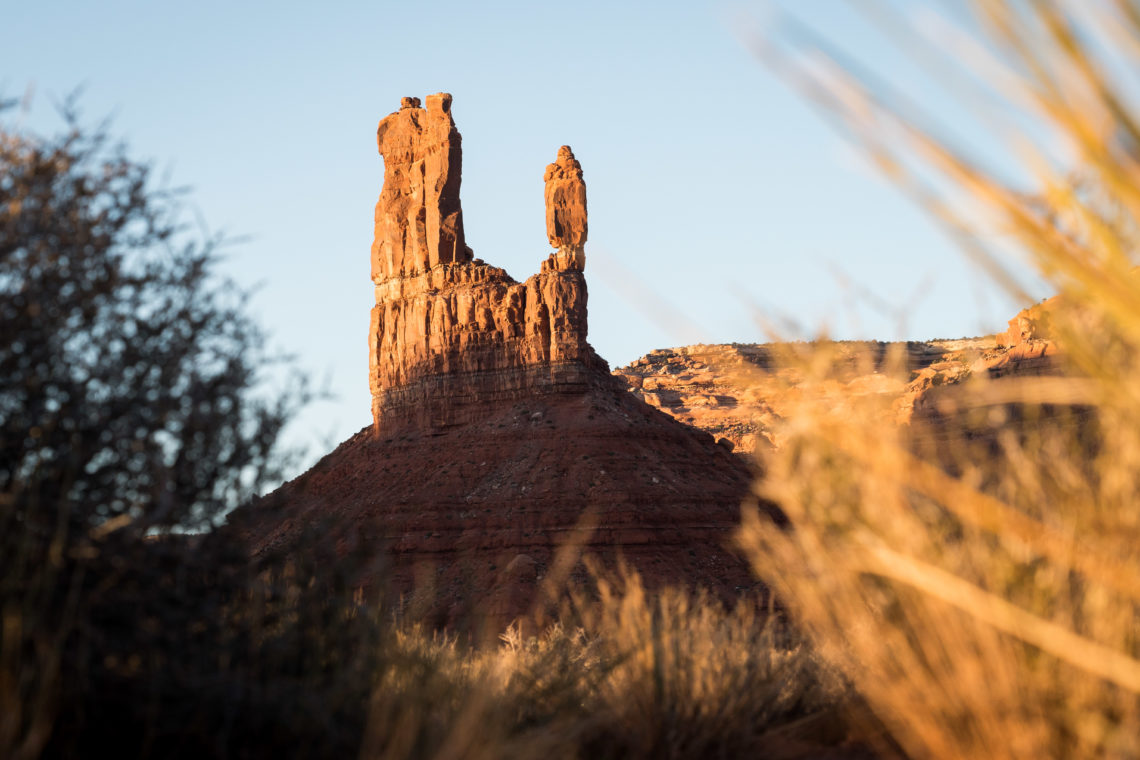 Get your desert fix while in quarantine: Morgan’s picks

One of the environmental movement’s most beloved larger-than-life figures was Katie Lee, whose love for the desert’s remote and hidden treasures fueled her vehement opposition to Glen Canyon Dam, which destroyed pristine Glen Canyon. This short 9-minute film offers a reflective look at the activist’s life and legacy. Watch it now!

The desert has long been home to mysterious characters; the story of Everett Ruess is in a class of its own. A renowned writer, artist and explorer, he disappeared without a trace in the desert lands of Utah in 1934, at age 20. Roberts’s search for clues to the Ruess mystery is the definitive biography of this prolific figure in Western history.

Desert Notes: Reflections in the Eyes of a Raven by Barry Lopez

Lonely Are the Brave

This 1962 Western follows ferociously independent cowboy Jack Burns as he attempts to help a friend escape from prison. Complete with barroom fights, jailbreaks and chases on horseback, Lonely Are the Brave is an exciting film adaptation of legendary writer of the desert Edward Abbey’s novel The Brave Cowboy.

Get your desert fix while in quarantine: My picks

This is Bear’s Ears: Patagonia’s VR experience takes you into the heart of the desert

One of the coolest applications of virtual reality I’ve yet seen, This is Bear’s Ears is a multimedia experience that allows the viewer to explore Bears Ears National Monument in 360 degrees. Climb the Lightning Bolt Cracks on the North Six Shooter with Tommy Caldwell, explore slot canyons with Navajo tribal leaders, and trail run amongst desert spires. Though it’s best enjoyed with Google Cardboard or a VR headset, scrolling on your computer screen works well, too. So cool!

The Secret Knowledge of Water by Craig Childs

“There are two easy ways to die in the desert,” says Childs: “Thirst and drowning.” This meditation on water in a land of dryness and scarcity is proof that no one writes about the desert like Craig Childs.

Bears Ears National Monument in southern Utah got plenty of media coverage over the last few years, especially when the Trump administration slashed the monument’s size by 85 percent. But Robinson’s book goes deeper. Through conversations with tribal members, ranchers, archeologists and other local stakeholders, Robinson delves into the discussion around the monument at the center of public lands issues in America.

The Creativity in Human Powered Adventure