How can we make the outdoors a space where everyone can find a sense of belonging? Tyrhee Moore and Scott Briscoe know that mentorship and representation are two crucial pieces of the puzzle. 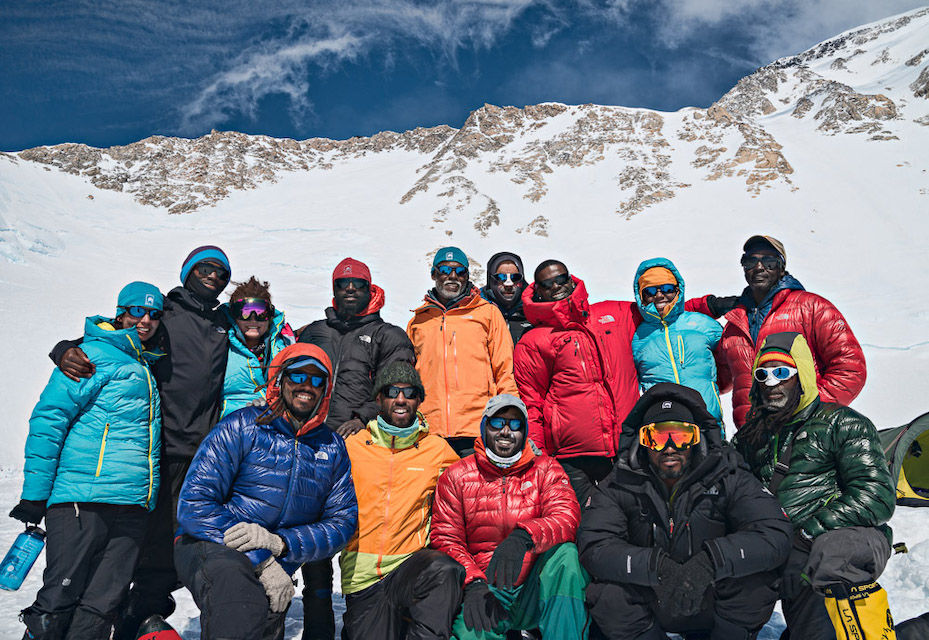 “Am I supposed to be here?” The question tiptoed behind Tyrhee Moore like a shadow. Over rock, through the snow, and across rivers, it followed his every step. The shadow nagged at him; pulled him out of the present. Worst of all, it seemed to belong to him alone—and he alone bore its burden.

Moore, then 18 years old, was a participant on a mountaineering course in the Cascades. He had been offered a scholarship from the National Outdoor Leadership School (NOLS), and jumped at the chance to realize a dream that was worlds aways from his home in Washington DC, where pursuing a sport like climbing was more or less unheard of. The month in the mountains was full of technical hardship, but dealing with the shadow of doubt was a challenge of a different kind. As the only Black person on the course, the whiteness of everything around him—from his course mates to the names of white first ascensionists marking nearly every summit—only served to remind Moore of his blackness.

“There was nothing to connect myself to as a Black male,” said Moore in an interview. “And that became really hard because no matter how much I enjoyed the experience, it didn’t seem like I really had that permission to be there.”

Feeling a sense of belonging in the outdoors is far from a given, especially for racial minority groups in America, for whom even basic safety outside can be a real and constant concern. It doesn’t take much observation to see the overwhelming whiteness of our niches in the outdoor community, whether we’re bikers, climbers, paddlers, skiers, or what have you. Let’s also zoom out a little, and consider what it means to be a public lands owner. The battle over the fate of public lands has been one of the most galvanizing issues for the outdoor community in recent years. In these issues, many people—myself included, until recently—tend to operate on the core assumption that public lands belong to everyone. While that may be true in a legal sense, the de facto public landowners are the ones who feel like they belong on public lands. By this measure, people of color are largely excluded from the land ownership that many people of privilege take for granted as a basic right for all. Moore hauling gear on Denali in 2013. Of Expedition Denali, teammate Scott Briscoe said, “It had a very deep impact on each of us in terms of leadership, empowerment, mentorship, growth…. the other aspect is the impact that we’ve had on the broader community.” Photo courtesy Tyrhee Moore

Why does this matter? First, obviously, is the injustice and inequality of the status quo. I owe the most formative moments of my life to experiences in the outdoors, and it saddens me to think of all the people who might have something to gain from outdoor experiences but never will because they don’t see a place for themselves there, simply as a result of their skin color. Second, only people who love our outdoor spaces will protect them. Every person who takes a step into the world of the outdoors only to step back because they don’t feel a sense of belonging—or worse, feel downright threatened—is a lost potential steward of the land.

Representation matters
Soon after questioning whether he belonged in the white and privileged world of adventure, everything changed for Moore. He met a group of fellow Black mountaineers for the first time. The event was the initial stage of a plan created by NOLS to form the first all-African American expedition to Denali. Moore spent a weekend in conversation with Black climbers who had a wealth of experience and who had found a place for themselves in that space. “The introduction to all these other leaders in this space really assured me that there was a space for me,” Moore said. “But it also told me that there was so much work that still needed to be done.”

In 2013, Moore became one of the youngest members of Expedition Denali, as it was called. In the company of so many accomplished Black adventurers, Moore’s initial feelings of excitement about an opportunity to climb a big mountain turned to the realization that the potential impact of Expedition Denali went far beyond any summit. “That expedition was much bigger than any of us,” he said. “Being around [my teammates] for that year and a half prior, training and preparing, I learned that they were doing this for everyone else. They were doing this to truly make a statement and show people that this is a place for them.”

One of those teammates was Scott Briscoe, who, in the years since Expedition Denali, has made it his mission to share the story of the first all-African American climb on Denali with people around the country, from audiences at the White House to groups of elementary school students in Ferguson, Missouri. When Briscoe, whose father is Black and mother is Latina, began skiing and climbing as a young man, people who looked like him were few and far between in the adventure sports world. He found himself asking where all the people of color were, and soon it became clear that their absence was due in part to an extreme lack of representation in outdoor media.

To illustrate the impact of representation, Briscoe (who has years of experience doing diversity, equity and inclusion work at the corporate level for the likes of Patagonia and the American Alpine Club) shares a story: “There’s a famous image that’s been floating around of this portrait of Michelle Obama [in the National Museum in Washington D.C.] and it’s this young black 2-year-old looking at this portrait, and for me, that picture speaks volumes.” It’s not necessarily that this little girl will be president someday, Brisoce says, but “what happens is that when we see somebody, especially as youth, who looks like us, a mere reflection of somebody who looks like us, our vision and our perspective is blown wide open.” 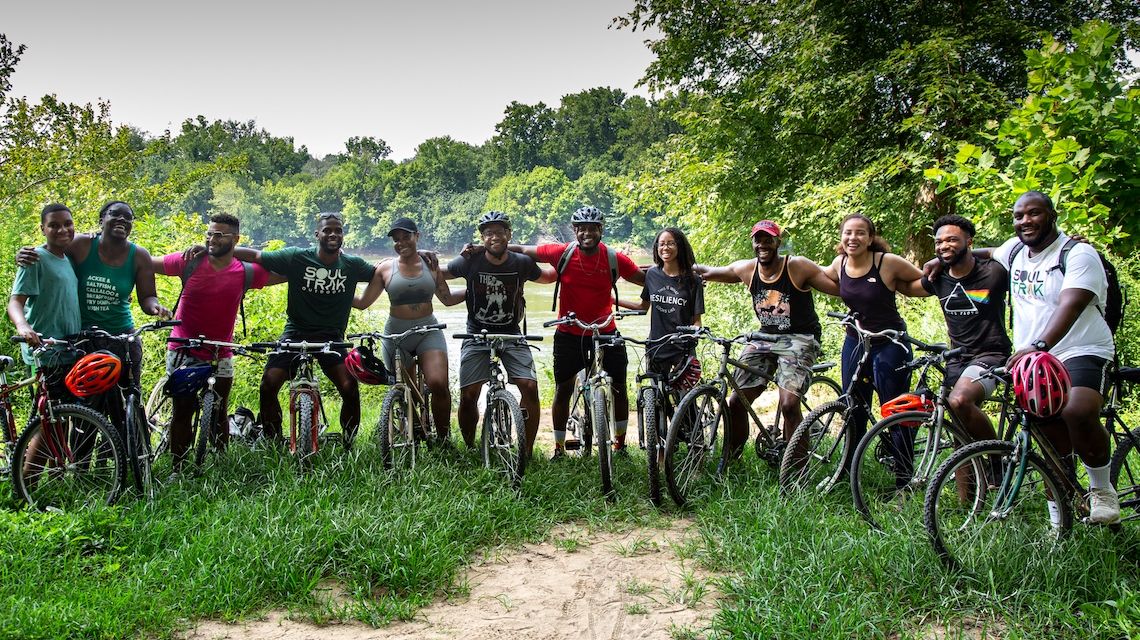 Briscoe lives to see that spark in young people’s eyes when their perspective about what’s possible shifts radically, and to that end, he’s presented the story of Expedition Denali to over 25,000 people. And that’s just Briscoe—each of the nine members of the expedition team have given presentations, chiefly targeting underrepresented groups and youth.

Where are we today, in terms of representation of people of color in the ads, videos and photos of outdoor adventure that we see? We’ve still got a long way to go, but in the last month we’ve seen a number of outdoor industry companies pledge to increase their representation. Of course, making promises is one thing; actually following through is another. But Briscoe is optimistic that real, large-scale change is happening, citing, among other examples, The North Face and their decision to pull all spending on Facebook ads because of the social media giant’s inaction against hate speech on its platform. As journalist James Edward Mills (who wrote a book about Expedition Denali called The Adventure Gap) pointed out in a recent webinar about systemic racism in the outdoors, a couple of decades ago it was difficult for outdoor companies to find authentic representatives of color. But now, the simple truth is that there are athletes from underrepresented groups at all levels of pretty much every sport. Companies no longer have an excuse not to represent them.

Mentorship
Moore’s revelation that there existed a world of Black mountaineers was only one piece of the puzzle. The other was mentorship. On the mountain, Moore could literally follow in the footsteps of people who looked like him and understood on a deep level his own experience because they had, in some way or another, lived it too. Representation allowed for the expansion of what was considered possible; mentorship provided a model for taking ownership.

And that’s exactly what Moore did. In the years following Expedition Denali, he became a leader and a mentor in his own right. He worked as a NOLS instructor and became the program coordinator for City Kids, the DC-based organization that first got Moore excited about the outdoors during his teenage years. Briscoe highlighted the significance of the fact that Moore returned to his home in Washington DC: It is not uncommon for people of color involved in the outdoors, he said, to be shunned by their communities for pursuing a path that isn’t generally accepted.

Moore was well aware of this phenomenon in the youths that he was mentoring. He said, “It was becoming really difficult to see so many kids not being able to truly enjoy the things that they were being granted opportunities for, and so I decided that we have to figure out a way to bring those same experiences here to DC, and many other cities like DC, and figure out how can we shift the culture and how can we get other people involved.” This was the genesis of Soul Trak, a non-profit organization that seeks to connect communities of color to the outdoors and provide tools to empower the next generation of outdoor leaders. “This isn’t just for me, or just for my peers,” Moore said. “This is for my mom, my mentors, and my older brothers and sisters, too. I wanted to create multigenerational programs that touched everyone so that everyone could feel like this was a place for them.”

Moore’s journey—from young man learning his way around the mountains, to role model for his community—lended inspiration to Briscoe, who recently launched We Got Next, a nonprofit that seeks to redefine the traditional portrait of an outdoor ambassador by bringing in marginalized voices, including people of color, people in the LGBTQ+ community, and people with a physical or cognitive difference. The We Got Next program (which takes its name from the answer to a question common on basketball courts: “Who’s got next game?”) starts with a group of people doing incredible work in the outdoors, and works with them to execute a project or expedition “critical to the outdoor space,” as Briscoe says. Then, they share their stories to audiences around the country—creating impact through their projects but also through representation to their peer groups. Critically, ambassadors in the third year of the program loop back and become mentors to first-year ambassadors. Briscoe, like Moore, understands that meaningful change happens at the community level, and thus has crafted We Got Next to create a community of mentors that will affect positive change in their spaces.

That We Got Next’s ambassador program mirrors Moore’s own path is not merely coincidence. “He’s the perfect example of what I hope We Got Next to be,” Briscoe said. “Not only has he grown in these spaces [as] a mentee and then transferred into that mentor role as an instructor and an executive director of a nonprofit organization, but he’s also taking that to his community. He’s going home to where he’s from, and showing that path that he’s gone through.”

Find out more about Soul Trak and We Got Next. Briscoe recently co-directed a film about Moore’s journey called Bringing it Home.

Max is a writer and 2019 ROAM Awards Essay Winner. Down to Bedrock is a new column that explores innovation in outdoor adventure. Follow Max on Instagram @maxoutside

For more on inclusivity in the outdoors check out 5 Ways to Make the Outdoors More Inclusive.