Why Aren’t There More Women on Everest?

An interview with ski mountaineer and adventure athlete Caroline Gleich 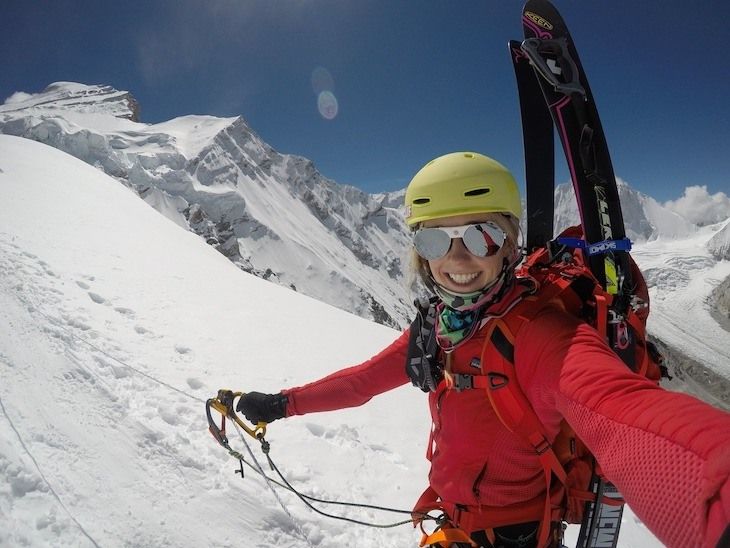 Mary Anne is an editorial director, writer, and producer

Caroline Gleich is unafraid to say what’s not popular. She’s been cyber bullied, IRL bullied, presumed to lack the skills needed for her objectives, and generally knocked around—for what seem to be the simple fact that she’s a successful, articulate, short, blonde pro ski mountaineer. She decided to boldly take on her critics in the film, Follow Through. It got 1.1 million views. Her honesty struck a chord.

Last fall, she proposed to her partner, Rob Lea, on Cho Oyu, while gaining the requisite experience to climb the North Side of Everest. Now she’s headed to the rooftop of the world, albeit with a torn ACL, to spread the message of implicit bias. I wasn’t familiar with the term was until she mentioned it to me in an email. Then I encountered it quickly again with a successful friend, a partner at a financial firm. In this new era of women’s empowered, it seemed Caroline was on to something that needed to surface.

For all the women readers, I would be surprised if one of us could not recall a moment of implicit bias in her life that had a profound impact on her self worth. Read on to get a better sense of what Caroline’s talking about…

What does implicit bias mean to you?
It’s a way to illustrate the expectations and stereotypes we have for people. A lot of this behavior happens on an unconscious level, unconscious reactions to or biases to people or situations.

How has implicit bias manifested in your life?
Beyond the differences about how people treat men and women, it’s my height, because I’m five feet tall, and blonde. People have a bias about blonde women not being smart, strong, capable, athletic, or any of those things.

As I started learning more about biases, I felt like I finally had words to describe what I had been feeling for over a decade as I was building my ski career and then getting into mountain areas. I saw it in the things that people would say to me when I was trying to do an ambitious project. Or just the way people had really low expectations for me. It was just nice to have a term to describe all these different things that I’ve been feeling for so long. 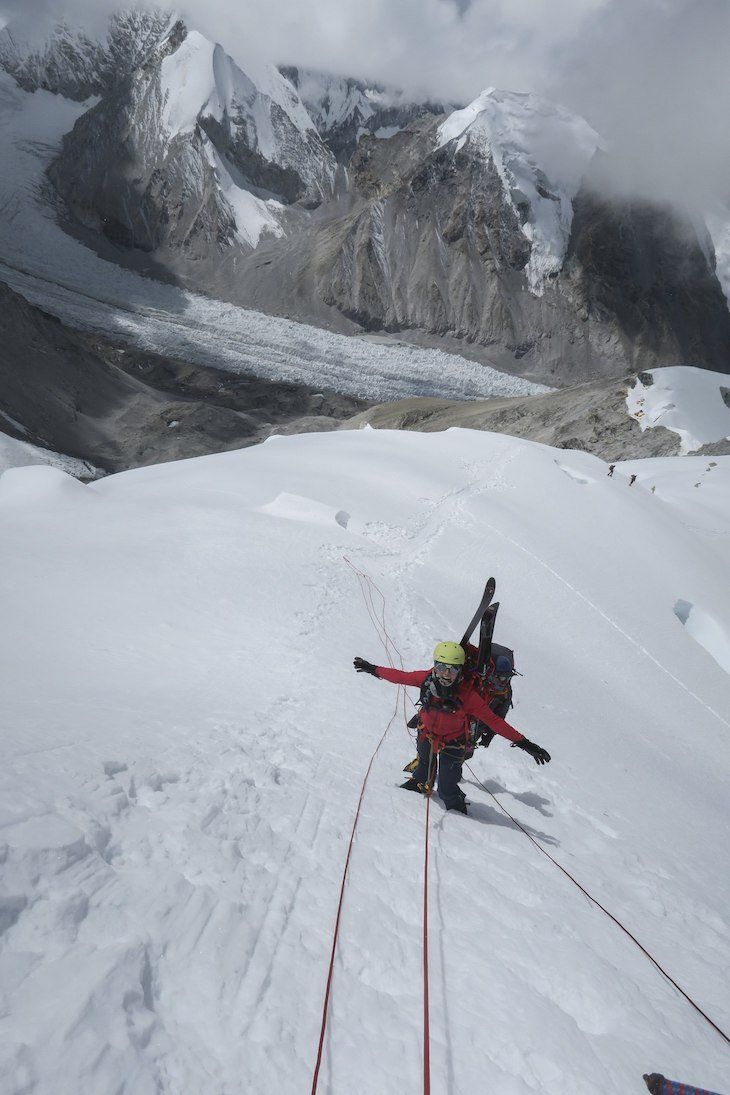 Caroline takes in the expansive view on Cho Oyu. Photograph by Rob Lea 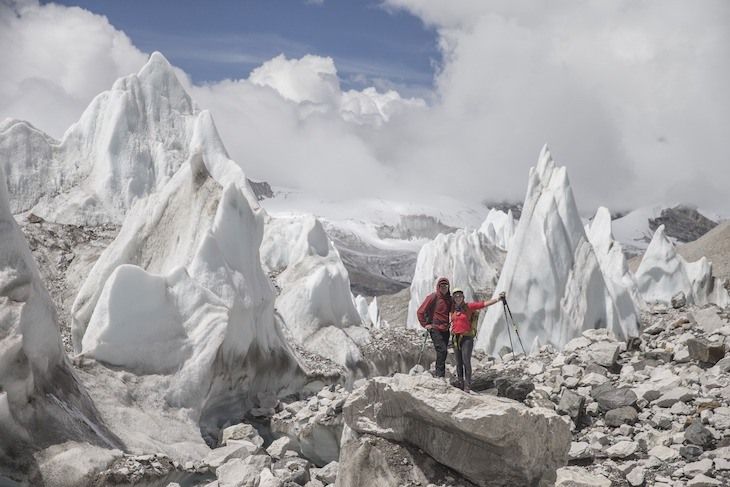 Making their way across the glacial moraine on Cho Oyu. Photograph by Rob Lea 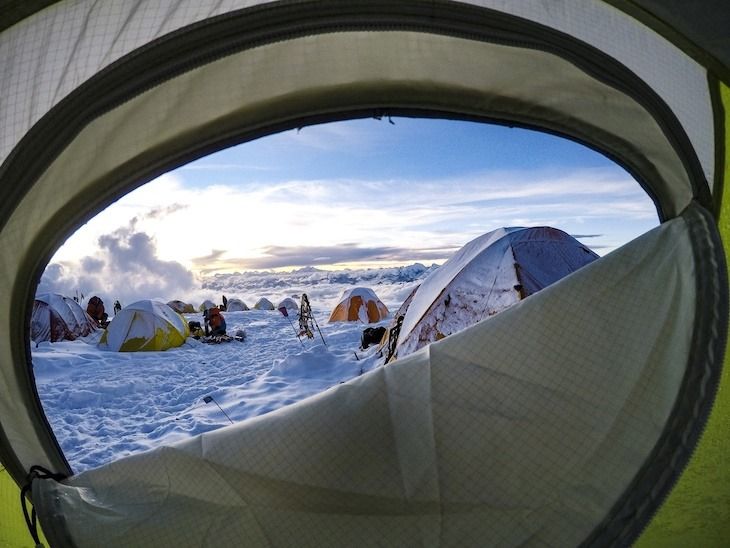 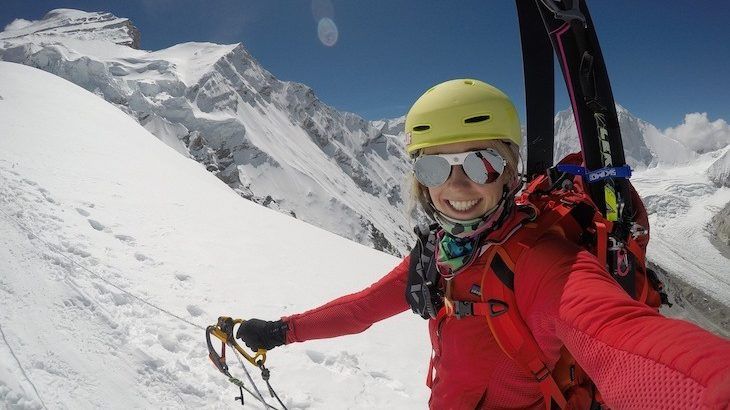 What’s an early memory of when you experienced implicit bias treatment?
Growing up with three brothers, they’d always go backpacking, and I had to wait until I was bigger and stronger until I could go with them. And that took me a few extra years because I was really small compared to them. I was the runt of the litter. So it made me want it even more though, having to wait for it.

Then I went to Chamonix in 2013, and I was going to see all of this on my own with my other friend who was very small and looks very young, too. Everyone was like, “You girls are going to die.” I don’t think it’s fair because that’s not normally something you would say to a male mountaineer. I just felt like I wasn’t getting the same treatment.

Another thing that happened was when I took my AVI 3, which is now called something else, but it’s the highest level of avalanche education. I was the only woman in the class with 19 men. At the end I failed, even though I had passed all the objective qualifications because I was told I talk when I should listen and I was strongly defensive from the start. My whole evaluation was an attack on my personality, and that’s just not an objective way to evaluate someone.

I also think that a lot of these things are exacerbated by the fact that I live in Utah, which is quantifiably one of the most sexist states in the U.S. The Mormon culture is very patriarchal and has very specific norms and expectations for what women’s roles are and where they belong—and it’s not in the mountains.

Now you are taking this message to Everest—how does that fit in?
As I was going through the data, I found out that only about 10 percent of climbers on 8,000-meter-peaks and Everest are women. I was really surprised because that’s a pretty small percentage. I’m also really drawn to the idea of how men and other people can support this work of inclusivity because it seems like as I’ve become more vocal about these things, I have realized that it is so much work and it’s so much emotional labor. Dealing with all the questions and educating everybody and talking to people about it, it’s a heavy load to carry. So, now I’m working with how can we get more men to be advocating for women’s equality? And so we sort of based it off of the UN movement called “He for She.” It’s about how men can advocate for
women. With Rob Lea, my partner in life and on this climb, we wanted to invite men to be part of the conversation.

How do the other climbers on the mountain and mountain workers play into your messaging?
Yeah, absolutely. It isn’t something that we’re delving into but it is important to be conscious of that. There are still not very many female mountain workers. It would be great to see more women as well—and I think like that’s a whole other issue. By starting to talk about it within our culture, hopefully we can have an effect on the rest of the world to make it a better place for women. As we went about planning this, we talked to Adrian Ballinger and Alpenglow and they actually hired two female guides for our expedition. So we have a 50/50 split of women and men on our expedition, which I can’t help but think that our mission sort of played a role in their hiring these female guides. We also have a female high-altitude doctor.

Why is it especially complicated to get a permit from Tibet this year?
They’re doing a huge cleanup on the mountain and they want to haul off a ton of trash. They are closing basecamp to tourists on the North Side, and then they’re just really restricting things so they can do this cleanup. They also want to bring stuff down from the high camps, too.

I guess for me and Rob, this issue felt very natural because when we started dating—he really comes from more of a triathlon background—and he had gotten some mountaineering, but I was sort of showing him the ropes of areas and more technical stuff in that world. When we’d go out, people would always just assume that he was the leader and my guide and it was just really frustrating. He’d respond, no, she is leading. I really appreciated that he would let me be in a position of leadership, and that we could learn as a team. Not a lot of men will like do that.

Are you guys doing the rapid approach technique?
Yeah, we’re doing it. So our trip will be about 40 days, so it’s considered a rapid ascent. Yeah, I’m super nervous. I mean but I learned a lot on Cho Oyu from when I got sick on it. Every time I have a trip or do more things in the mountains I learn more and more. I think I have a better understanding of what sort of led up to getting really sick. I mean it’s just one of those things where it’s good to learn a little but not hyper analyze and be too critical because high altitude pulmonary edema is something that can happen to anyone regardless of their fitness or training. So, I’m trying not to like beat myself up too much because it’s just one of those things that happens.

How are you going to be kind of sharing this message about the implicit bias during the expedition?
I have a social media tool kit I created that has a link to implicit bias assessment worksheet. One of the common ways that implicit bias plays out is in workplaces, but I think it’s also really applicable to mountaineering and how people speak about female athletes and female mountaineers. The first one talks about “prove it again,” where people from marginalized groups have to prove themselves over and over and their credentials are constantly questioned. It just was so nice to put words to things that I hadn’t been able to vocalize before. It gives some people objective ways to evaluate people and which will disrupt this implicit bias. Our hope is that people will read through these pages and then become more aware of it.

Do you feel like now with your injury, does that turn you into a damsel in distress?
Of course I have a worry, you know, it’s not ideal. However, I think that if it’s something that I can work through, it can make the story more powerful. I think that I’ll just have to take it day by day and see how it goes. I certainly don’t want to become a liability to anyone on the mountain, and I’m working closely with my doctor and with our high altitude doctor. It’s a shitty injury to happen with the whole message and that also women are two to eight times more likely to tear their ACL than men. In terms of pro skiers, I’m one of the few pro skiers I know who hasn’t torn their ACL yet. This is my first knee injury. So, it’s just one of those things that happens.

Adrian tore his ACL five weeks before guiding Everest in 2013 and so I think I can do it. I have to just roll with it and stay tough. It is what it is. I was completely devastated, but then as soon as I found out I could still go and that it was a possibility, it changed my attitude right away and I was like, I have to make this happen. In a weird way I think it might help me go into the trip more focused and rested and better equipped. If I didn’t have this, I would just be the dealing with skiing and the demands in my work [that are so] rigorous this time of year, that I’d be really exhausted. So in a weird way, I just got to embrace it and roll with it, and own the narrative and not let it be a limitation. Not skiing now is a way for me to be more rested and more prepared and more focused because I think Everest is going to be really f’ing hard.

Why is it important to roam?
To remind us what it means to be one with our environment – that we are a part of the ecosystem, not above it.

Why is community important?
For the promotion of mental health, we are not designed to live in isolated environments.