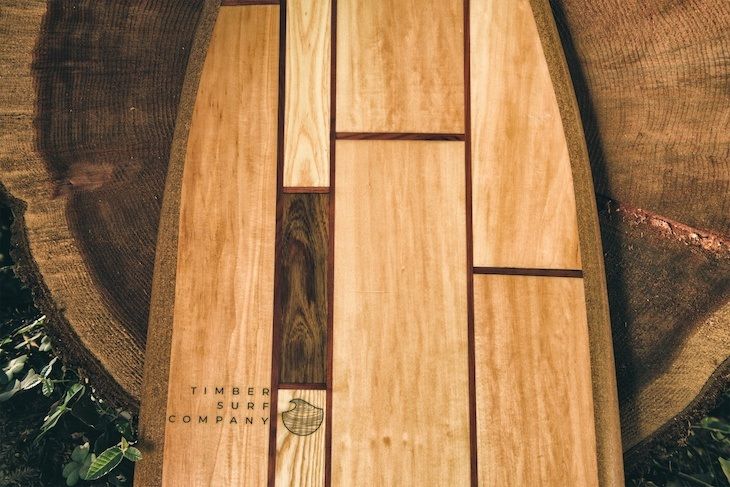 Andy lives in a Tacoma pickup with his dog Bea and works as a freelance producer, writer, and photographer

I pulled up just before noon and was greeted by two grinning, energetic dogs followed by a tan, bearded guy in his late 20’s, who I assumed was Ryan. We’d been texting for a few days, trying to find a time for me to visit his shop. Wetsuits were hanging on a nearby line, wet from a morning session, and the garage door was open. Inside I could see at least a handful of partially finished boards, an array of electric and hand tools, and wood shavings covering the ground. I was pretty sure I was in the right place.

Ryan Lynch is the founder of Timber Surf Co., a relatively new, year-old outfit based in the surf mecca of Santa Cruz. A soft-spoken ex-Tesla engineer, Ryan has the chops to design just about anything. But what he loves is surfing, which is why he decided to quit his job and start making wooden boards. 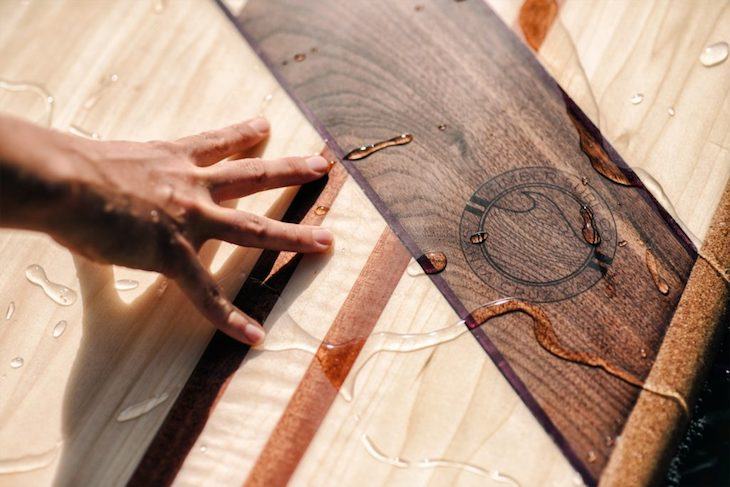 We spent the next few hours touring his shop, learning about the design process, starting from CAD drawings to prototypes and eventually, beautiful wood boards. Timber Surf currently sells just four board shapes, but has tested dozens of different designs. Each board is built 100% by hand, often sourced from reclaimed suppliers, and designed to leave minimal environmental wake. Our conversation started with boards, but quickly evolved to something larger.

“I think we had it right the first time. Surfing was a sport founded on wood boards, and it unfortunately frayed from that with industrialization. At a certain point in our country, the idea of a good product became something that was cheap, repeatable, and consumable, and less of a consideration for robustness, craftsmanship, and overall care. For this reason surfboards became mass produced using a petroleum base, namely polyurethane foam, and more recently expanded polystyrene foam. Add to that a few layers of fiberglass and a polyester or epoxy resin and the product becomes a chemical mess.” -Ryan Lynch

It’s not hard to envision what happens when foam boards go into the ocean. Micro-plastics are leached every single surf, slowly eroding off the board itself. Add in board wax and neoprene suits that are both petrol based, and the entire sport is a mess. The irony is that most surfers are humble and care deeply about the ocean. Ryan believes that if wooden boards were readily available at an affordable price, surfers would respond quickly, investing in an environmentally friendly product. 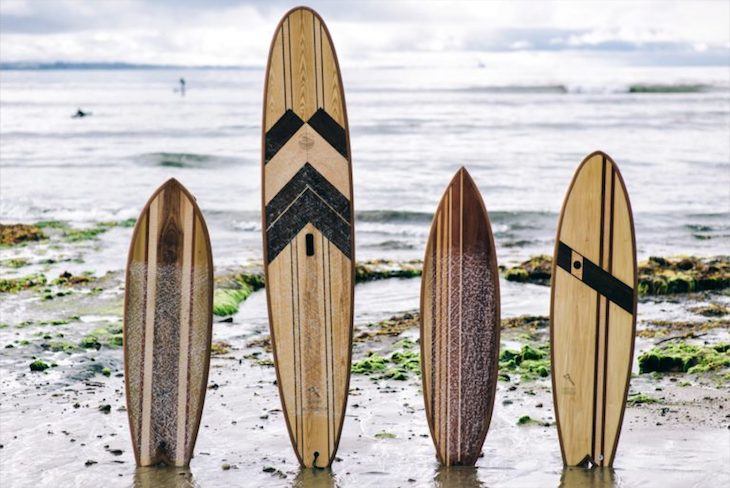 After meeting Ryan my interest in wooden boards spiked. A quick online search yielded hundreds of results and I learned quickly about other wooden shapers honing the craft. While none of these shops are household names, more established ones like Grain Surfboards have expanded into regional markets and found larger audiences via social media.

Launched in 2005 by Mike LaVecchia, Grain was originally just a side project. An amateur woodworker for his entire life, Mike wanted a quality board he could surf during summers in Maine, but the notion of foam never appealed to him. He spent months researching early wood building methods and their evolution to hollow board designs. Soon after the first board was finished he started the company in the basement of his house. One board lead to two and before they knew it, orders were flying in.

In the 14 years since Grain was founded, they’re holding true to the original mission. The team has grown to 12 employees, most of whom have been around in one way or another since the early days. They work together to mill wood, build boards, teach workshops, ship kits and help home builders design new shapes that are right for them. They have two year-round locations where people can visit to see what we do and try out boards. Building wood boards with no foam or veneers is still the heart of the business, but certainly not the only part of it either.

I learned a lot from Mike, including the history of the industry. Prior to foam, and the “surf industry” as we know it today, or really anyone that wanted to surf, likely made their own board. Grain aims to put this opportunity back in the hands of surfers, but doing so with state of the art technologies. The team uses 3D modeling programs to help surfers create any board they can dream up. This year alone they’ll launch 6 new shapes, many in collaboration with some of the best shapers around the world.

Because Grain was one of the first in the wooden board renaissance, they were forced to reinvent the wheel. Mike calls this “re-evolution,” studying early wooden board shapers like Tom Blake and combining that process with the known benefits of foam shaping that are efficient and inexpensive. Combined, they make a high performance product that’s much more environmentally friendly.

“Surfers today think a foam board is the standard that all others should be held up to. Yet foam wasn’t designed to benefit surfers, it was designed to benefit shapers due to its low cost and ease of use. When looked at as a per use cost, you’re spending significantly less money on a board that will last for a very long time over the foam board that will pressure dent and possibly break after one hard season.” – Mike LaVecchia

We talked a lot about costs, both for the consumer and the environment. Foam boards don’t begin in the shaping room; they begin in the ground as crude oil and after extraction go through a highly energy dependent process where chemicals are combined in a mold, gases are released, and the foam blank is created. Instead, Grain builds boards from local, sustainably-managed cedar, no foams and no veneers, and since they handle every step of milling in house they are able to maximize the use of the material. Many offcuts get repurposed into other smaller items like blocking and rails. Even smaller scraps get used to heat the shop in the winter. ‘Waste No Waste’ is a mantra they live by. 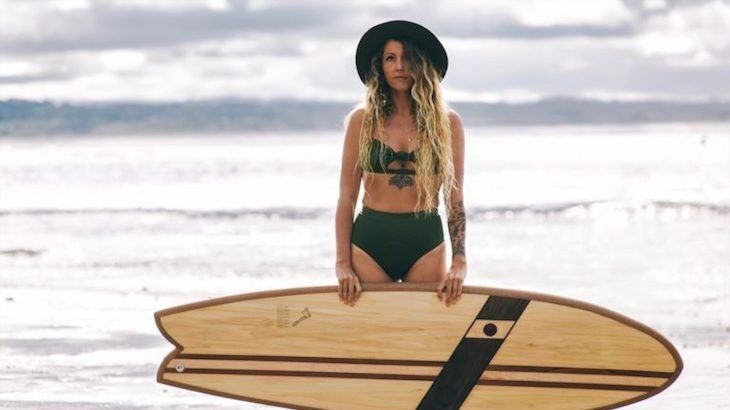 Another well-established shaper, Ventana Surfboards, is also based in Santa Cruz. I spoke with David Dennis, the founder, who started the company 5 years ago. A similar story, Ventana was started because David had a desire for a wooden board and in his case, didn’t have a lot of money to buy a new one. With some woodworking skills he decided to build his own. After seeing this board in the water, people started asking for David to build boards for them, so he dove into doing it commercially.

The process of making a board, even after it’s fully designed and all of the systems are in place, still takes 6 weeks. But the most challenging part comes before that – refining the shape, which starts by studying hydrodynamics and ends with molds to work from. David was self taught using mostly online resources and a few calls to other shapers. Like Ryan and Mike, it took him more than a year to master the process. Even after a decade, he’s still trying and learning new things, while some parts of the process have stayed true since the beginning. Ventana only uses reclaimed wood, much of which comes from their Upcycle Partner Program.

The wooden board wave is building elsewhere as well. Western Europe and Australia have started to adopt the shift more than others, with many wood board makers, and eco-friendly certifications popping up across France and Spain. Dominant voices in the industry are starting to speak towards equal performance with lesser impact, but it’s admittedly just a start. The mainstream industry is driven by sales, and foam boards dominate the market.

Across the pond in the UK, James Otter has been shaping for nearly a decade, founding Otter Boards in 2010. James fell in love with surfing as a teen and after making a few boards for himself, James started the company, hoping to give consumers an option that lasted long and was far more sustainable than polyurethane foam and fiberglass options.

The company has grown slowly and steadily, now employing five people. Never intending to be a businessman nor hoping to make much money, James saw the craft as a way to live the lifestyle he wanted and have a positive impact on people’s lives. Like the other shapers I spoke with, James also believes mastery is an illusion, and that he always has something more to learn. They are consistently working on different shapes, testing them in the ocean, and excited for what the future holds.

Almost all of these sentiments hold true for other wooden board shapes like No-Made and Hess Surfboards. Small shops founded with a love of the ocean and a lot of hustle, focused on reducing their environmental impact. After many conversations with shapers, some clear themes rise to the surface. The merging of legacy with new-age technologies; the attention to details in the craftsmanship; and ultimately, they all start and end with one thing: wood.

“Wood is a sustainable material. It’s biologically organic. It is abundant. It is robust. It’s local. It grows naturally. It is biodegradable. It is often up/down-cycled for various craft or builders. It feeds our atmosphere with oxygen. Foam is none of those things besides abundant, and this is exactly the problem. It is made in a lab, almost always outside of this country as our EPA production standards dis-allow it, and it is incredibly unsafe for labor forces to co-exist in these production facilities. It is shipped all over the world, it is 0% recyclable and will literally never break-down in a landfill. Due to its abundance and infiniteness, it kills animals, reefs, beaches, cities, and islands.” -Ryan Lynch

Check out our next Project: Waves of Change