ROAM Founding Member, Ian Walsh, is one of the individuals who continues to push the boundaries of surfing 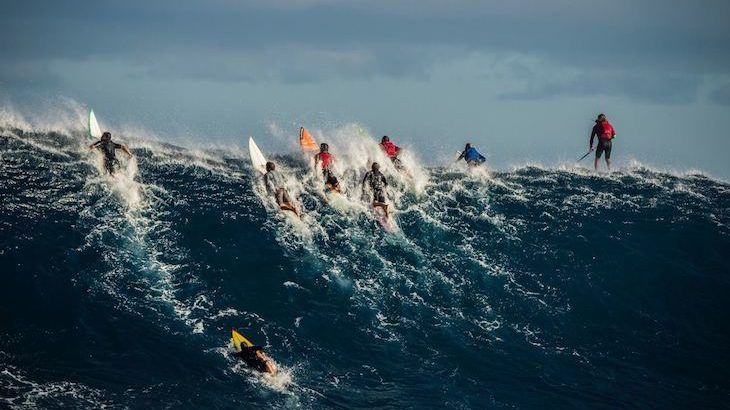 Micah is a marketer and avid outdoorsman based in Santa Monica, CA

Surfing will appear for the first time at the 2020 Olympics in Japan, the world’s largest stage for competition in sports. The sports progressions in new boards have allowed surfers to conquer waves of a whole new caliber.

Roam Founding Member, Ian Walsh is one of the individuals who continue to push the boundaries of surfing, specifically riding big waves. Ian, a Maui native, has grown up surfing and has devoted his life to driving his skills and talents forward, in turn driving the entire sport forward. He is involved in all areas of the sport’s progression, from board design to safety equipment and techniques. “For me, I enjoy trying things and I like my equipment,” Ian says. “I want everything to be state of the art, so I can try to push myself as much as I can. If part of that process is testing equipment and trying different things, then I am all for it. I love it and that is part of what it is to be a surfer as we are trying to evolve the equipment.”

Ian’s curiosity for finding the next step in surfing fits perfectly with his shaper, Chris Christenson. Chris, a shaper based in San Marcos, California, has been shaping boards for over 20 years that have been used by the world’s best. Chris finds inspiration from all over, from retro shapes of the late 1960s to surf-inspired snowboards he has designed in collaboration with Jeremy Jones and Jones Snowboards. “It is really cool and inspiring to see him step outside of the box and be willing to try certain things,” Ian says on Chris’s creative thinking. 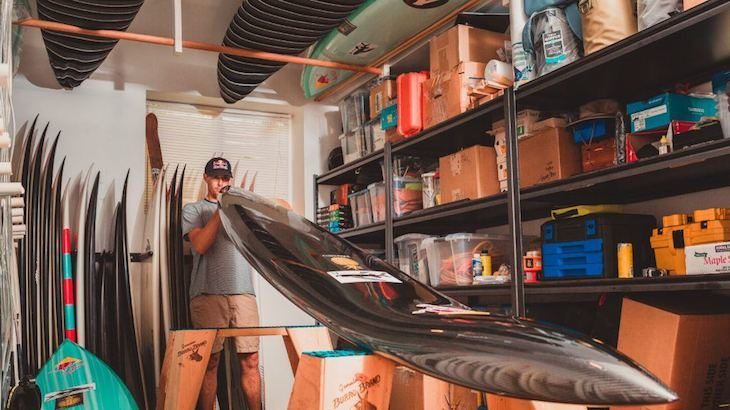 This season, Chris approached Ian with a new, forward-thinking big wave board that he co-designed with a Naval aerodynamic and hydrodynamic engineer. This board looks vaguely like a big wave surfboard but has a huge bulging nose and is made out of carbon. “This board was designed and built by Chris specifically for big waves, so the outline, the rocker, the design of the nose of the board, were all built towards surfing big waves,” Ian adds. “The shape of the nose and the general outline and design concept of it is meant to benefit some of the apparent wind that the waves create as they move in against the wind that is coming,” Ian says on the design and purpose of the new board. “It is kind of meant to absorb some of that wind and help us get down the face rather than hinder us and lift us up. If you watch a lot of film, you’ll see the nose of the board lifting up and creating this pause in the momentum into the wave that can be the difference between actually making a wave or getting launched over the falls. Once you lose that point of contact, it creates a pause when a wave is moving at an incredible speed that you definitely don’t want to have. The idea in my head is that where I would maybe get some of that lift and pause, this might just chop out a little piece of that and allow me to have that momentum into the wave in that upper third of the entry point to really help me get in on time.”

Ian is unsure if the design will actually work, but he is inspired by the prospect of driving the future of big wave surfing forward. “I think more than it actually lending to the greater conversation of progression of equipment, I think for me personally it sparks that interest and creativity of like, ‘Let’s try this thing.’ If it doesn’t work, then maybe I learn something that day that leads to something else. I think that it is like that with every sport and everything in general. If you only use the same things over and over and never really expand on what else there could be and follow that creativity, then there would be a lot of instruments that we use in everyday life that probably would not be as efficient as they are now.”

The relationship between Chris and Ian is what progresses surfing forward; the way they are able to exchange ideas and thoughts on certain technologies and designs. “As a surfer and a fan of the entirety of our sport and looking back at the history of everything that has happened as far as design and the way those boards were ridden in waves of consequence, it is really cool to see how Chris is on the edge of both of those. Some of those retro boards he has are incredible like it almost looks like a time warp when you pick them up and put them in the water. And then you go and look at what he is doing with a board of this caliber and it is the other end of the spectrum. I think that again really lends to what makes him really unique and special as a surfboard creator, is his ability to not be conformed to one thing. He is open to what else is out there.”

Ian and Chris are open to what else is out there too and without their forward-thinking, boards would not be where they are today. They need each other to continue to progress the sport forward and the relationship they have developed has proven what can be achieved when two creative thinkers collaborate and utilize their skills to help both of their crafts.

For more on Ian Walsh check out:

Check out our next Project: How a Pro Climber Became a Coffee Connoisseur