Routes to the Top of Mt. Everest

So you want to climb Mt. Everest? 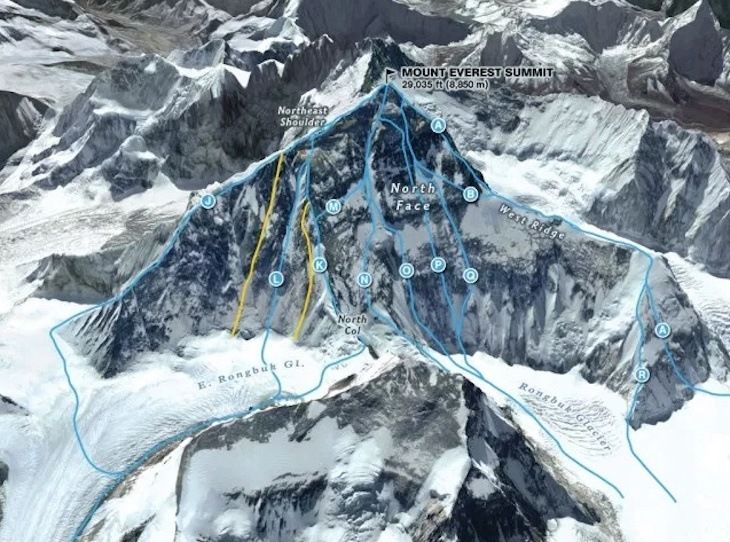 Alan is a professional speaker, story teller, and mountaineer

For 98% of all Everest climbers, the choice of routes comes down between the Northeast (Tibet) and Southeast (Nepal) Ridges. For most everyone, all other routes are too dangerous, too difficult and not commercially guided.

It may be an exaggeration to say that almost all the routes that can be climbed on Everest, have been climbed because a new generation of climbers always finds a way to blaze new trails.

However, it does appear that Everest has been well scouted now and there are about 20 routes clearly identified and almost all have been attempted at least once. Two still stand out today as unclimbed – the direct route up the East Face and the Fantasy Ridge aka the East Ridge. Both are extremely dangerous, and avalanche-prone. In years with little snow, the route becomes unclimbable as shown in 2006 by Dave Watson and team on the Fantasy Ridge.

2018 was a record year for Everest summits. The previous record year was 2013 with 670 total summits by all routes. The Himalayan Database has updates for 2018. There were 802 summits and only 1 who did not use supplemental oxygen and 68 females. The Nepal side saw a total of 562 summits made up up 266 foreigners (aka members) and 296 High Altitude Workers (aka Sherpas). For the members who got above base camp, 76% went on to summit. On the Tibet (aka Chinese) side there were 110 summits for workers and 130 by foreigners for a total of 240 summits. 66% of the members above base camp summited. There were a total of 5 deaths in spring 2018, 4 on the Nepal side and 1 on the Tibet side. 1 climbing was climbing without supplemental oxygen and was on the south side.

It can be difficult to analyze the routes as they are often named after their geological feature or the national team or even the person who first climbed it. But in general, there are about 20 climbing routes identified on Mt Everest.

There are many, many variations on the non-standard routes. For example, climbing the standard Northeast Ridge to the summit and returning via the Great Couloir or the North Face. The Southwest Face is also popular, this variation includes the Bonington Route but also climbing via the Rib.

While the vast majority of climbers on the north side take the Northeast Ridge route, actually they are joining the ridge in the middle. The first ascent of the true Northeast ridge was in 1995 by a Japanese team. They start at roads end at 5,150 meters. One section of that route is called the Pinnacles and is extremely technical and difficult. It took them three days and fixed 1,250 meters of rope to navigate thru this section.

An interesting bit of trivia is that of the 8,306 summits, only 265 (197 members and 68 hired) took a “non-standard” route in other words, not the South Col – Southeast Ridge or North Col – Northeast Ridge. There were 80 deaths on these climbs. This is 28% of the total deaths and most likely the reason none of these routes are offered commercially – too high of a risk.  Only 28 of the 265 climbers who summited by a non-standard route did not use supplemental oxygen.

This is a list by face with descriptions that include the common names plus some used by the Himalayn Database.
The illustrations are courtesy of National Geographic (Martin Gamache, Jaime Hritsik, Chiqui Esteban, Ng Staff Sources: 3D Reality Maps; The American Alpine Journal; The Himalayan Database; Ed Webster; East Face Imagery Courtesy Of Digital Globe @ 2012; Raphael Slawinski). Visit this National Geographic piece about a proposed new route in 2015 with an excellent article and animations. 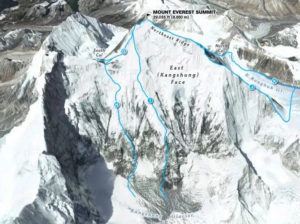 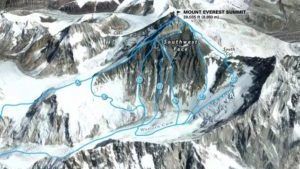 Check out our next Expedition: By Hand: These Twins Paddled from Alaska to Mexico.