From climbing prodigy to kidnapped in Kyrgyzstan to sawing off his finger one day in his garage, Tommy Caldwell has led an exceptional life. Now add to those exceptions: climbing one of the world’s hardest free climbs, the Dawn Wall on Yosemite’s El Capitan, as the world watched on.

When Tommy and his partner Kevin Jorgeson finally topped out on the Dawn Wall (see the feature film) on January 14, 2015, the global media scene exploded. The New York Times, who had been following Tommy though the course of his seven-year obsession with the route, did in-depth stories in the paper as the duo struggled to make history, outcome unknown. Their coverage was said to be more popular than the Super Bowl. Imagine that, a rock climbing adventure that was more popular than football!

Why? Sure, this section of El Cap was incredibly steep, incredibly blank of holds, and seemingly impossible to do without the aid of gear, which is the definition of “free climbing.” Each of the 32 pitches had to be completed unaided and without a fall. But unlike “free soloing,” the purists’ pursuit where no ropes are used, free climbing does use ropes and safety gear to protect in the event of a fall, which is why the climbs can be so dang hard. But why did the world go so nuts?

Opening this week, the new feature film The Dawn Wall answers this question. It opens in New York and L.A., then will screen for one night only across the country on September 19. Find out more here: http://www.dawnwall-film.com 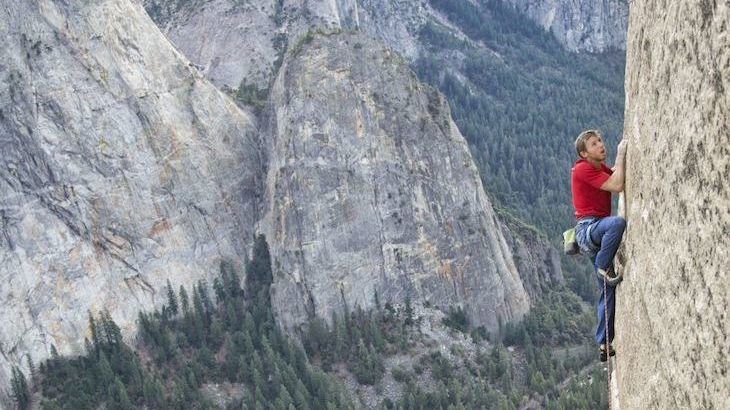 Tommy Caldwell on the Dawn Wall. See the story in the new feature film in theaters 9/19. Photo by Brett Lowell, Sender Films

Question from @daisycrowns – How good did it feel to complete the Dawn Wall?

Yeah, it felt great to complete the Dawn Wall, because it was something that I had worked really hard at. But on the other hand, it was kind of sad, because I had developed this deep relationship with the climb, and I loved being up there. So, when you top out, you’re like “I don’t get to be up here anymore!” So, it’s kind of mixed. It was just really emotional.

Question from @austrian_ninja – How do you feel about being a role model for the next gen of climbers?

I think the public aspect of who I am is a privilege. It’s something that if you ever get a chance to influence people, you’ve got to make the most of that, and do it. But it’s not my safe space, I’ll say that. But I’m trying to do my best.

Question from @ozaama – What’s the most beautiful place you’ve been to?

Oh, man, I’ve been to a lot of beautiful places. Yosemite is kind of my favorite, because it’s where I grew up, and it hits home in a lot of ways. But Patagonia in Argentina is unbelievably beautiful. I love the Alps. It’s hard to pick one.

Probably my favorite mountain in the world, I would say, is Fitz Roy in Patagonia, because I named my son after that, and I spread one of my best friend’s father’s ashes on that mountain. So I don’t know, it just means a lot to me, in a lot of ways.

Question from @nuclear_fuson – What’s your favorite work out?

My favorite way to work out is just to go into the mountains with a bunch of friends, and climb a lot. I think that’s the most effective, as well as being just the most fun.

When I’m at home, I probably climb in the gym like three or four days a week. It’s kind of the most effective training tool.

Question from @iankblock – What’s your next big project?

Everyone asks what’s my next big project. You know, things like the Dawn Wall don’t come around every day. So, in the meantime, I’m climbing a lot, but things that aren’t quite as daunting. I’m also doing a lot of public lands advocacy and hanging with my family all of the time. Yeah, just kind of living life.

I feel like I’m going to school right now, trying to learn how to be an environmental advocate. I’ve been doing a lot of lobbying. Bears Ears has kind of been the focus, because that’s a climbing area that’s in turmoil right now. So yeah, I’m trying to do that. But right now, currently, it’s about trying to get people out to vote for the mid-term elections, because in my opinion, this is the most important mid-terms in a really long time.

Question from @vandalfthegreen – Who have been your biggest influences?

My father, for the whole first part of my life. When I was a sport climber, Chris Sharma was pretty much everybody’s biggest influence, but definitely mine. I got to go to Europe with that guy. And most recently, Alex Honnold, of course. He’s one of my best friends, so he’s maybe a bad influence, because he gets me to do sketchy things, but he’s an influence.

Question from ROAM: Are you a good influence on @AlexHonnold?

I try and be a good influence on Alex. I try to get him to rope up, and find fulfillment in things that hopefully will not kill him. That’s my goal, at least.

Question from @griplc – What did you eat on the Dawn Wall?

Historically, on big walls, we just would bring a lot of canned food and camping food, like trail mix and a lot of Clif Bars. When we went for our 19-day push, though, we knew we were going to be up there so long that we needed to step up our game. So, we brought packages of salmon and a big Tupperware of veggies, and like kale. Yeah, our eating scene was pretty legit.

Question from @braden_stanley777 – Does climbing ever get in the way of family?

Climbing gets in the way of family sometimes, and family gets in the way of climbing, sometimes. It’s hard to juggle all of that, but we do our best. Life inevitably has a bit of tension here and there, and you just work it out. In a lot of ways, climbing adds to the family tremendously, as well, and vice versa.

Oh, my biggest fear! I wonder if anybody has ever asked me that before. Probably, at some point. These days, now that I’m a dad, my biggest fear is losing my kids somehow or another. Once you become a parent, that hits home.

Question from @nickyhavens – How do you work through your fear while climbing?

Working through fear while climbing is just, you train it, much the way you train your mind or you train a muscle. You kind of just incrementally expose yourself to more and more scary situations, but always keep them under what’s going to completely get you to go off your rocker. Just be a little bit scared, a lot, and you’ll get better at being in scary situations.

Question from @thisis_laura – What would be a good start for a newbie at 32?

Go to the climbing gym. That’s the best way for anybody to start, these days. It’s got great community. They exist everywhere, and it’s just a good vibe.

Question from ROAM – You are missing a finger. How’d that happen?

I lost my index finger on my left hand, just below the first knuckle there. I did it with a table saw. When I was 21 years old, I was working on remodeling my house, and didn’t really know how to use power tools that well.

What losing my finger did is it pushed me toward adventure climbing, which was more fulfilling, and something that I was just naturally better at, anyway. So, it became sort of the biggest period of growth in my climbing. Yes, I’m not going to be as good of an indoor climber, or as a boulderer, as I would have been with all ten fingers. But it kind of worked out better this way, anyway.

Question from ROAM – What’s the future for women in climbing?

I wouldn’t be surprised if in a lot of disciplines of climbing, the women, in a handful of years, are going to be way better than the men. I think their pain tolerance is better. I think they tend to be a bit tougher. And just the body type suits. They’re more flexible. The body type suits way better. I’m really, really excited to see what women do in climbing, in the next handful of years, especially with things like the Olympics coming around. I think the women’s aspect of the Olympics is going to be way more exciting than the men’s.