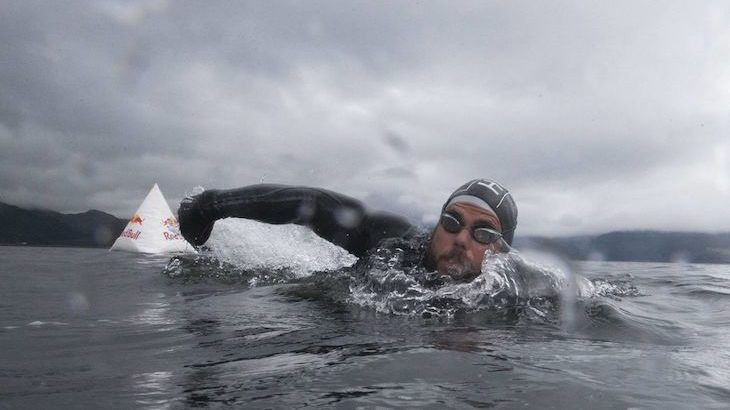 Madeline has a background in marketing and communication and is based in Boulder, CO

In 1998, French-born long-distance swimmer Benoit Lecomte, now 51 and back in the water chasing an ambitious goal (see below), was recognized as the first man to swim across the Atlantic. In 73 days, he covered 3,500 miles of the sea, from Cape Cod, MA, to Quiberon, France. Lecomte set a record for the longest assisted contiguous sea swim—a record that would not be broken for 20 years.

Two decades later, on August 14, 32-year-old Ross Edgley of Lincolnshire broke Lecomte’s record on the 74th day of his attempt to swim around Great Britain.

Think his name sounds familiar? Perhaps you recall when Edgley completed a marathon while dragging a Mini Cooper and rope climbed the height of Mt. Everest in 24 hours in January 2016. However, he is on to new pursuits.

Since June 1, Edgley has not touched land. He is on a mission to swim the 2,000-mile distance around Britain’s mainland in a hundred days. Each day, Edgley consumes nearly 15,000 calories, swims 12 hours, and covers 30-50 km of the sea. Similar to Lecomte, Edgley battles jellyfish stings and watches for sharks, but on this particular journey, Edgley combats heat waves and tongue disintegration. When Edgley is out of the water, he is recovering on his support boat, the Hecate, which is also home to the support team that nourishes, guides, and tracks him. Edgley’s support extends beyond those aboard the Hecate— locals and marines are also advising and supporting him along the way. After setting this record, Edgley can refocus on his larger goal— to become the first person to swim around the land of Great Britain. Follow this link to track his swim.

Lecomte’s legacy is currently earning more accolades as well. On June 5, he began tackling a new body of water—the Pacific, the world’s largest ocean. Over the course of 5 to 6 months, Lecomte is set to swim the  5,500-mile distance between Tokyo and San Francisco. This is not a lone experience, Lecomte has a support team aboard his 67-foot sailboat, the Discoverer, and his inflatable boat, UFO, ensuring he is properly nourished, tracked, and guided–there are also researchers from 13 different scientific institutions aboard. Part of the route will lead Lecomte and his crew through the “Great Pacific Garbage Patch,” which is a stretch of water known for its high concentration of pollutants, especially plastics. Traversing through these polluted waters allows the crew to collect data on the marine life. Every day they collect samples of water containing microplastics with a neutson net in the hopes that this data will reveal how long they have been in the ocean, and what their weathering processes consist of. The collected data and analysis will be groundbreaking.

If completed, Lecomte will be the first swimmer to cross the Pacific Ocean and to complete the longest swim. Lecomte is currently on the 71st day of his swim. You can follow his journey here.

THE TWO SWIMS AT A GLANCE

Benoit Lecomte’s Swim Across the Pacific

Check out our next Expedition: A Bikepacking Gear Guide: The Essentials